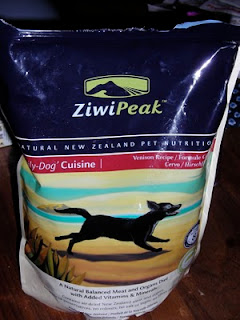 Rogue Ross has lost almost seven pounds since August. Since he is not exactly a chunky monkey in the first place it is an understatement to say I have been "concerned". We have been buying all kinds of venison dog food trying to find that magical taste that will get him eating again.

Yesterday we found it! Ziwi Peak Venison Jerky style dog food. Even the bag looks tasty. I pulled Sean over and laughed at the major oversight on the quality control of our favorite dog store. $113 for a bag. Ha ha! That's hilarious. I wonder how much it really costs. Um, nope not a joke. It really is $113 a bag. Luckily for us, there is a smaller option. A 2.2 pound bag for a measly $24. With my discount that brings it back down to about $22 bucks which of course I am much more willing to try.

Rogue who has normally been doing a perfect teenage angst impersonation when I try to feed him started doing the happy dance before Sean could even get the bag open. What's in this stuff? Crack? Anyway, he polished off his bowl before it even hit the floor. I'm not sure it was even chewed. The worst part is he begged for more all night long and even kept it down perfectly.

Now comes the dilemma. We have spent a fortune on this dog over the 6 years of his life that he has been in our home. Medical expenses galore will have us working until we are 90 at least. But $113 dog food? Seriously? For some reason that just kills me. I tried explaining it to Rogue this morning as he was anxiously awaiting me to put his bowl of perfection on the floor. Sean heard me and laughed at the thought that I was trying to reason with the dog as to how long I'd be able to keep up this food. Sean himself pointed out "It's cheaper than the vet and if it gets him to eat".

Rogue had a much more creative solution to the whole problem. Let's see how his idea pans out. If not, I think it's going to be up to the man in the Red Suit. Time to call in the big guns. 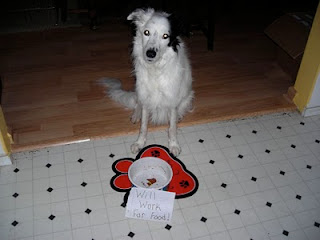