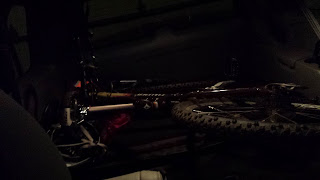 This is not the greatest picture, but that is my much neglected mountain bike in the back of my car. Truth be told, I haven't ridden her in over a year. So a few months back when I saw the flyer for the "Women's Mountain Biking Skills Clinic" show up on a Facebook page I knew it was time for me to sign up. Oh, this wasn't the first time I signed up either. I did it last year too. Then a couple of days before the event I gave in to the fear and I canceled.

This year I was the first person to sign up. I did it almost 3 months in advance. I told myself as soon as the weather gets better I'll start riding. Then it was as soon as work settles down I'll start riding. The weeks came and went and I didn't get on my bike once. Fast forward to the week before the clinic. Sean is desperately trying to get me out on my bike or at least into the driveway to practice before the skills clinic. Unfortunately, my body had other plans and I got a case of bronchitis the entire week before the clinic. Nothing a little antibiotics can't take care of, but it was also the perfect opportunity to back out. Again. So, I sent an e-mail to Mary the instructor explaining the fact that I've been sick and I'm concerned about holding others back. She assured me that wouldn't be the case, but left it up to me. So, I mustered all my bravery and I decided it was go time. No more excuses. You see, my whole life I have quit before I really try. This time, that was not going to be the case.

So yesterday I was right on time to the local bike shop. I had no idea what to expect. My fear factory brain started creating scenarios of fit college women who would leave me in the dirt (literally). Instead, what I found was a group of seven women  ages 27-47 who were just like me. They were trying to improve their fitness and challenge themselves in an activity that might scare them a little too. We got our bikes checked out and headed over to a field by the university where we could learn more about the sport, the bikes and strategies to employ as we got started. Mary taught us some drills and we got started. The first thing was riding up a ramp and down the other side. I have always been nervous about narrow pathways, so this was good. I thought nothing could go wrong, but the first woman went right over the edge. When it was my turn I was trying so hard not to go off the edge, I almost did. First rule, look where you want to go, not where you don't! The bike follows your eyes. We practiced several drills and then were sent home with instructions to meet up at the Saddle (a network of trail heads) the following morning.

Today I woke up nervous. My fear was strong this morning as I got ready to go.  As we all met up we chatted about our fears and how we all almost didn't go. Once we all arrived, we headed up to the trail. We took a gravel road that was a bit of a climb. No one tried to outshine anyone else. Everyone just took their time and chatted and encouraged each other. It was such a nice ride up. When we got to the trail, we got instructions from Mary and started down the path. We stopped and regrouped before the technical turns on the path began. I'm not going to lie. The turns were scary and trying to pick a line is tricky when you can't seem to take your eyes off your front tire, fearful that some rogue root or rock will suddenly leap off the trail and attack you. Mary gave us tips like not to run over sticks bigger than your finger, or don't run over loose rocks bigger than your fist (known as baby heads). As the morning progressed, I noticed that with each conquered obstacle my confidence increased. Not enough to do anything stupid, but enough that I was getting a little more out of my head and a little more into the trail. The more I got out of my head, the more the fear began to dissipate.

I'm not going to lie. There were crashes and tears. Not mine today, but we were such a tight group, when someone got hurt or went down, everyone was there to rally around them. It was the most supportive group of women I have ever met. We all vowed to keep in touch and I honestly hope that this is the case. Because when you all go through something like that together, when you all face your fears and support each other, then it forms a bond that I hope continues on.

I also am pleased to report a renewed love affair with my bike. I can't believe that I had forgotten how much fun it is to be out in nature riding a bike. As Humphrey Bogart said at the end of Casablanca, "I think this is the beginning of a beautiful friendship."
Posted by tracie at 2:46 PM No comments: