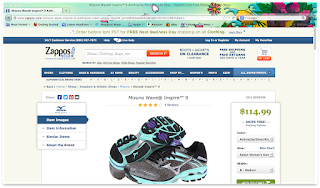 This is just a lazy screen shot. I actually already own them and it was not only love at first sight, it was destiny at first run.

I hope we spend many, many happy miles together.  Oh beautiful Mizuno Inspire 9s, how do I love thee... let me count the ways!

I have a feeling I'm going to start stock piling these puppies while I can.
Posted by tracie at 9:07 PM No comments:

Today was the first charity run of the year from Fitness by Emily who put on the "Ugly Sweater Run" last month. Clearly the theme this time was "Run your TuTu off."  We took this very seriously and donned our own version of the "TuTu".  Mine, Annie and Sarah's were courtesy of my birthday gift from Melinda who made them all by herself. Sarah pillaged some of her TuTu material to create one for Maddie. Stafford stuffed Grocery Outlet bags and tied them together. He should have won most creative prize hands down, and Zach used his collection of bandannas. Sean was the closest thing to a party pooper choosing not to don a skirt but rather fashioned two "2"s which he pinned on his shirt. Chicken!

Today's race benefited "Benton County Furniture Share" which is a fantastic cause. I'm still hoping to donate a couple of chairs or more to them in the not to distant future. I just have to drag them out of the house when Sean isn't looking!

Here is the shot of the Bunnies. It's highly unlikely that an event will take place in this town that we don't run together.
What's that you say? Have I been hitting the beer a bit to hard? No, that's my inhaler and my other glove in my pocket. I love the way it looks like a gut is hanging over my tutu. By the way, both Melinda and I have been working out like fiends since the new year and we both look pretty hot!  Apparently a tutu adds like 30 pounds. So does this mean real ballerinas actually only weigh 57 pounds since they look like they weigh 87 pounds? Oh and yes, I am wearing my hat backwards. Thanks for noticing. Note to self, don't ever wear a hat that looks the same from both sides!

Did I mention that it was freezing this morning? It hasn't gotten above freezing nor has the sun been seen in these parts in days, maybe weeks, or perhaps even months at this stage. I'm lost in the fog literally so it's hard to tell.

Next months race is set for the 16th of February. The theme is not yet known but we were told to think "hearts".  Hmmm. Gale, if you're reading this, I expect to see you there. You are so ready for a 5k!

I'll leave you with the little Ross family shot. In spite of how stupid I look in this tutu, I had a blast and am looking forward to the next one. It's amazing what a little community outreach can do for the soul!

Three days ago I turned 44. While I'm still trying to wrap my brain around how I can possibly be that old. However the number itself is one of my favorites and I've looked forward to having it represent me for an entire year.

Any time you have a double number it is fun, but 44 is extra special because of the significance in our family. One of the best things that has ever happened in my life was the birth of my nephew. Zach is one of the lights of my life. He was born on April 4 at 444 in the afternoon.  That's a bunch of 4s and ever since that day we have always loved the number 4!

The birthday itself was fantastic. I spent the evening with those I love, eating tacos and laughing. I got some very thoughtful presents and enjoyed myself. It was one of the best birthdays I've had.

Posted by tracie at 8:39 AM No comments:

I learned today for the second time in less than a week why you hold the title of "Most Hated Government Agency."  I appreciate the notice you sent me detailing the exceptional number of hoops one now has to jump through to renew a driver's license. I followed your instructions as per the letter I received in the mail. Upon my first trip to the DMV I was told my passport was not acceptable because it had expired. No where in the letter did it state that I had to have a current passport, only an official US government issued passport. For your information my expired passport is all I need to renew and get a new passport which gives me a lot more freedom than your stupid driver's license, however, that wasn't good enough for you. After lecturing me about the importance of reading a letter prior to showing up, you then threatened to keep my license when I asked you to show me where it said anything about the date of the passport. You informed me that you could invalidate my current license and issue a temporary while I requested records if I was sure I didn't have a copy at home. Annoyed and unsure, I left to search for my documentation at home.

I didn't find it, so I returned to the DMV office by my work  only to be told the same story with additional misinformation. I was told this time that not only could I not use the passport (again, asked to be shown where it said that and again was ignored and treated like an idiot), but that I "couldn't" be issued a temporary license either because I needed the proof of identity to get my birth certificate. I asked what I was supposed to do since my license will expire in 2 days and was told, get a temporary license while you wait for your birth certificate. I said, fine, I'll do that now. She said, no I can't do that, you must order your documents first.

I went home and ordered it online and wait for it...... no license necessary. Now, thanks to repeated misinformation and general power tripping I have to return again tomorrow to pay $40 to get a temporary license until my birth certificate arrives next week sometime (which cost me $40), whereupon I can get my licence renewed for another $40.  All so I can prove I'm an American citizen and thus fit to drive an automobile.

No matter that I have all sorts of documentation to that affect already. No matter that being an American citizen has nothing to do with driving a fucking car.

So fuck you DMV. You suck and I hate you. I hope you and your power tripping employees have an exceptionally crappy day.
Posted by tracie at 6:40 PM 2 comments: