Yesterday I remembered what it felt like to breathe again. It came in the form of a bicycle ride through freshly fallen leaves. The cool and crisp weather brought dry leaves which made that wonderful crunching sound as we rolled over them. The ride was to the farmer's market. I was in search of my favorite treat of this season. Liberty Apples. I wait all year for them. I should just break down and plant a tree of my own. But then again, I'd just miss out on my fun fall ride.

It's been a rough few weeks. The beginning of the school year is always stressful and this year there are some major changes going on with the change to common core and the new teacher evaluations tied to test scores. I don't believe in it at all and I'm not sure how I'm going to survive this phase of the education system. I'm going to continue doing what I know is right and what I know is best for kids. When that stops being acceptable, I'll walk away and move onto my next chapter.

I've also been pretty much sick for the past 3 weeks. I'm sure this stemmed from the nature of the job and the huge increase in stress associated with said job. Couple that with my nagging foot injury which has kept me from running for going on two months and it's a recipe for weight gain and cloudy head. Not a good combination. Yesterday's ride got me thinking about getting back in the game again.

Who says you can't teach an old dog new tricks. I'm looking at switching to biking as my thing. While my dr. continues to bring up that nasty "swimming" word, I'm much happier on two wheels. When the weather gets worse and the sky get darker earlier I'm thinking of switching to spinning. I always loved that.

Ok, time to go think about getting some additional crunch time under my tires.

End of an Era 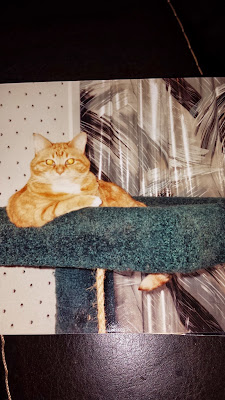 Sometimes stereotypes fit. You know what they say about red heads right? Well, Bailey lived up to it. She started out life as an abandoned barn cat, left to die, by a mother who knew better. Unfortunately, my mother with her heart of gold, rescued the two orphan sisters and hand fed them until they were old enough to go to their own homes. Bailey joined our family when she was just 6 weeks old. That was nearly 18 years ago.  Today, the angry ginger left our world. She will be the last cat we ever have. In ways both good and bad, no other feline could ever live up to her legacy anyway.

Bailey was the most cantankerous cat ever. She loved small children, big black and white stray dogs, canned tuna and trickery. Her best friend ever was Marley dog. I think she gave up a little when we lost him a few years ago. She took her grief out on all border collies who entered our home from that day forward. Bailey was the reason that we couldn't keep a pet sitter for more than one weekend for years.  She made grown men scream like little girls, and was known to chase said men clear across the house. My favorite cornering involved a house guest of Sean's becoming trapped in the bathroom by the 8 pound cat.  We awoke in the middle of the night to  "Sean, come get your fucking cat."  That story still makes me chuckle. Who needs a guard dog when you have an 8 pound, hand raised kitty.

She had the tease down to an art form. We would give all house guests the typical disclaimer warning "no matter how cute the cat is, don't pet her, it's a trick."  Inevitably, they would somehow think they were the cat whisperer, who could conquer her. She'd spot them a mile away.  It always started the same, weaving between their legs like a perfect figure 8. "Look how cute I am" she'd beckon. Then she'd pull out the big guns and flip over on her back. We'd repeat our warnings, but no one would ever listen the first time. As they reached down to pet her she'd seal the deal, a small glistening bit of drool would begin to form in the corner of her mouth as she let them scratch under her neck. Then, quick as lightening it would happen. She would simultaneously wrap all four paws around their arm while pulling it to her mouth for the bite. Perhaps she had some vampire blood in that twisted gene pool of hers.  Sean and I could do nothing but exchange the "told you so" glance while going for the anti-bacterial soap and band aides.  I once had a co-worker who now wears a permanent scar from falling for this not once, but twice.

I don't want you to get the wrong idea. While she was a nightmare, I loved her. Even things that annoy us are worthy of our love. The house isn't going to be quite the same without her. She was my perfect training tool for Annie's "leave it" and "stay".  She wouldn't get within 5 feet of Bay. She knew better. I will miss her peeking underneath doors to see what we are doing. I'll miss her random swipes at the dog and my feet as we passed by.  Mostly, I will miss her spirit, because unlike the rest of us, Bailey never did one damn thing she didn't want to do. She also was never afraid to give you her honest opinion about anything. We could all stand to learn to live our lives a little more like she did.

Finally, I'll leave you with an early picture. She could be a sweet kitty when she wanted to, usually for an extremely short period of time. Like just long enough to snap a picture. You can see in her eyes, she was about ready to serve me up some ginger attitude.  RIP Miss Bailey Ross. Thanks for a great long run. 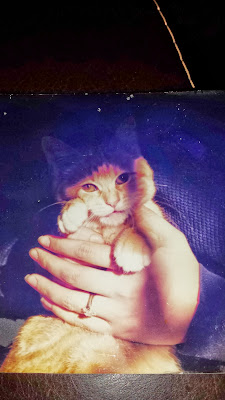 Posted by tracie at 7:39 PM No comments: