Does this look big? 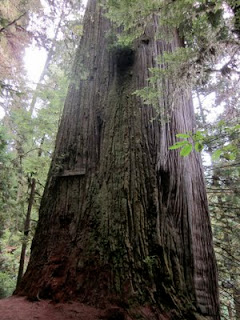 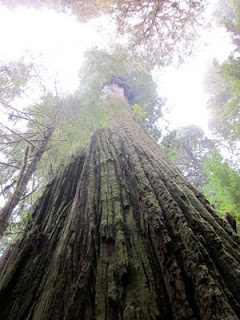 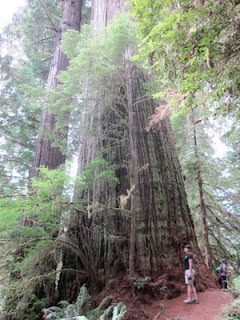 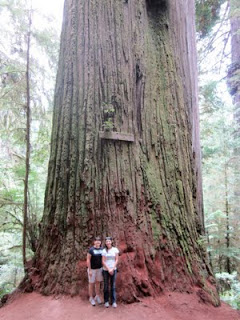 Thanks Jedidiah Smith Redwood Park (and Ranger Nate) for one hell of a hike to the Boy Scout Tree. I can't imagine a better end to our first family summer together! 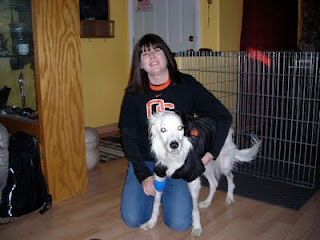 This is an older picture, but one of my favorites. It's the sparkle in his eyes that gets me every time. When we got Rogue from Border Collie Rescue over 6 years ago, his name was Moses and I was drawn in by his eyes. "He has the eyes of an old soul" his foster mom proclaimed. "He is someone special."

Special is right. This dog is a genetic nightmare. He has been in and out of vet clinics for the majority of his life. I'm pretty sure his bills are responsible for an entire wing of the OSU Vet School. All the while, wagging his tail and freely giving kisses to anyone who was within tongue range. Rogue is the definition of happy feet.

So imagine my horror this summer as we have watched him waste away to nearly nothing. His 40+ pound frame dwindled down to under 30. Rather than bringing joy, petting him now causes me to cringe. I can count every vertebrae in his back, every rib. I avoid taking him outside for his walks for fear I will be turned in for animal abuse. My fears were nearly realized when I took him in for his annual blood work last week. The vet was horrified by his appearance and quickly we dove back into the world of tests, tests and more tests.

Every result opens new questions and more tests. All the while my little boy leashes up and wags his way into the vets. Kisses and wags at the ready.

Today, some answers. Luckily it appears we aren't looking at cancer. Rather, we have a narrowing of his intestines, making it difficult for him to get the nutrients he needs. I was given a whole range of options. I'm starting with the conservative. I have already put him through multiple surgeries, each resulting in horrible circumstances for him, and honestly for us too. I'm not sure what I'll do if this doesn't work. I just can't imagine not having my dog here at my feet, happy to see me every day. For now, I won't think about that. He is my boy and together we are going to take this one day at a time. 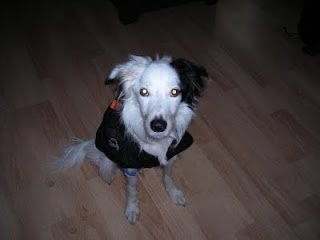 Wow! No more complaints about the lack of summer we've had in the valley this year. It has hit hot and heavy over the past couple of days here.

Even Rogue doesn't want to do anything.

Of course I should have known it was coming. I'm back to work in two short days!

Posted by tracie at 4:07 PM No comments: 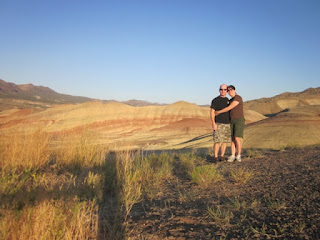 It's the end of the fourth quarter of summer vacation. One week is all I have to get about a million things done before returning to my regular work schedule on Monday, August 29th. Yet all I can think of is the fact that this is still vacation time for me. I'm trapped in the painted hills. I begin a project, pull things out of a closet, start the laundry and then the longing begins and I go for a bike ride. Yesterday I scheduled my projects around a mt. bike ride, a wine tasting and yet another ride. This is not good.

It is a very fine line this fun vs. responsibility. On the one hand if I go straight for the project completion and forgo the fun, then I will head back into a very stressful school year feeling resentful. But if I go the other way and have one last week of fun then I re-enter the school year faced with the things that I know will drive me crazy!

But 7 days is such a short time. I actually counted the number of days I had off this summer between full time grad school and work commitments since school has gotten out. 14 days. Not 3 months, not 2 nor even 1 this year. 14 days of summer for Mrs. Ross this year.

Hmm, with that knowledge I think I just talked myself into at least one more day of vacation fun. Besides, this is the weekend. Everyone gets weekends off right?
Posted by tracie at 8:22 AM No comments:

Rocks, Roots, and Cliff Drops..Oh My! 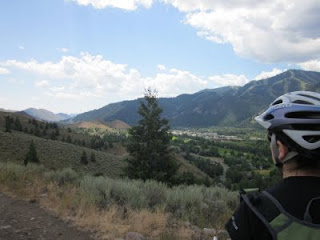 It is no secret that I have been on a Mojo Quest in terms of Mt. Biking for over a year now. I don't know what it is about my personality, but I'm one of those who walks on the safe side of the street. Nerves of steel will NEVER be my nickname. Sure, I'd like to think that somewhere deep inside this 5'4" frame is a crazy dare devil who would surely emerge to reign victorious.

So this past week we loaded up the car with two shiny new bike racks and all the various paraphernalia necessary for a week in Sun Valley. Billed as the Mt. Biking "Nirvana" if you will, I was excited to try out my legs and reclaim some sort of pride on my two wheel steed.

The first clue that this wasn't going to be as easy as I'd hoped came on the first day on our bikes. Sure, I knew that Sun Valley was a base elevation of around 6000 feet, but what the heck. No big deal. However the first ride out of the condo parking lot let me know that this was not the case. No amount of inhaler puffs would make up for the thin air here. As we peddled around town, each increase in gear angered the elephant sitting on my chest. Seriously, I think I was passed by more elderly people on cruisers on this trip than any other. Keeping my pride in check, my resolve was still intact as I planned out a ride I would try the next morning.

The first off road ride was a former gun club, turned into a golf course/mt. bike trail. It meandered up some rolling hills with a lovely single track. While the air was still thinner than I'd like, the course was nearly perfect. There was one point where I came around a corner to see over the edge to the road out of town below me. My strategy was to just look forward, not down. It worked and we finished a great ride. 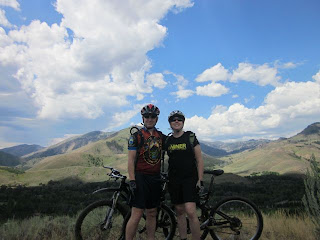 Still basking in the glory of early success, I agreed to try another more difficult trail. We consulted our recently purchased trail guide book. Ah, yes, here we go.This one was called "Fox Creek." We had initially scoped it out on foot the day before. It went right over the Big Wood River and looked lovely. I should have listened to that little voice in my head when I saw the rating of "moderate". However, the technical rating was just over 1. Well, ok then. I'm not moderate, I'm easy. (well, you know what I mean) but I figured that was just my cop out, chicken self and I decided I'd be fine. Besides, if it doesn't challenge me, how can I ever improve.

Challenge me this trail did. It was way too technically difficult for me and I pretty much was on the verge of tears the entire time. There were roots, loose rock and a single track that climbed at a very steep angle while skirting the edge of a cliff dropping into a river. Now I can handle roots, rocks and single track independently just fine. But the trifecta was enough to nearly send me into the fetal position right in the middle of the trail. Sure there were moments of greatness, followed by sheer panic. Any mojo I found on the previous ride and then some was left in the dirt on this one. After I finish typing out this story, this trail ride shall become the trail ride that is not mentioned. It got ugly, and I'm not talking about the scenery. See, when I get this far out of my comfort zone, I become someone I'm not proud of at all and let's just say someone who by the middle of the ride, Sean was no longer speaking to. Not good when you are 600 miles away from home on a romantic vacation for two. It took several hours, one jack & coke and a martini before we were laughing together again.

The next day I raised the white flag and said "enough." I sent Sean out to ride the gondola not to 7000 feet like our previous ride, but rather all the way to the top of Mt. Baldy at 9000+ feet where he rode all over hell and gone with no bitching, terrified wife anywhere to be found. Instead I stayed in the condo reading a lovely book. It was fantastic!

However, by Friday I was feeling guilty again. After all, this was my opportunity to regain my biking confidence and yet it was now worse than ever. I couldn't let it end like that. So I picked up the much misleading trail guide book and found two that were marked "easy". I convinced Sean that it was worth his time to take this psycho wife of his back out again. Sure enough, there were some less than "easy" climbs and more rocks, roots and cliff edges. But this time there were no tears. There was no terror and dare I say it, there were some smiles. 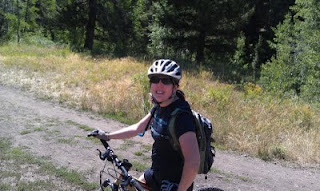 By the end of the week I had over 30 biking miles under my belt. Most of them were happy. It is my intention to keep it that way. My bike may currently be covered with bugs and dust from the ride home on the top of the car, but it is my solemn intent that she won't be covered again with spider webs from my own garage. No, it took much too long to get this mojo back and I'll be damned if I'm going to let it slip away again. Although, I have a sneaking suspicion that it was here all the time. Just under the surface. Waiting for me to realize like Dorothy in the Wizard of Oz, I had the power the whole time. I just needed to go away for a little while to realize what was right here all the time. 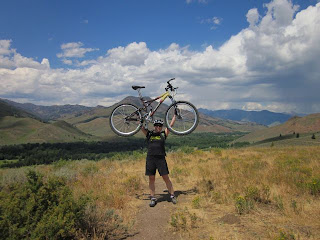