Today I lost it just a little. It happened when I went to change loads of laundry only to discover that my washer was stuck in the final rinse cycle because I left the lid up. Empty. Of course I started a new load, walked away to multi-task and promptly forgot about the load itself entirely. So now not only did I have to finish out the empty load, but I was behind on my already tight schedule. How does a woman of 43 handle such things? Just the way you'd expect a mature person to handle it. I walked out of the room and started bawling. Who cries over an empty laundry load? This girl.

You see, at 4 weeks into track, spring term of grad school and round 2 of OAKS testing, I'm just a tad bit done. I thought I could handle it all when I signed up for it. Turns out, my aspirations were a little too high this time. I was ok until my boss made his problem my problem last week and suddenly I'm not just coaching the track team but planning the track meet as well. Thanks a lot for that by the way. What I wanted to do was just let it fail since it wasn't my problem in the first place. That however was not fair to my athletes who have worked so hard. Rather, I did what I always do and said "ok" and picked it up. I'm a total wreck over trying to plan something I know nothing about, but I'm at least giving it the time of day. I sure hope it turns out ok because my students really deserve better than this.

The think that is suffering the most is my grad class this term. I skate under the wire each week submitting assignments right before the deadline. It's not my best work, but it's what I can manage. Track will be over in 2 weeks so that will help a ton.

Thank goodness for a husband who deserves a statue of gold in the front yard. After finding me in tears today he reminded me to breathe, that he'd help and that we are just going to take it one step at a time. That's a far cry from the "I told you so" he sure could have responded with considering he did in fact tell me so. He predicted this would be too much and that he didn't want to see me fall apart. I'm a lucky, lucky girl.

Thanks Sean for being who you are and not who you could be.
Posted by tracie at 4:54 PM No comments:

A little dose of D 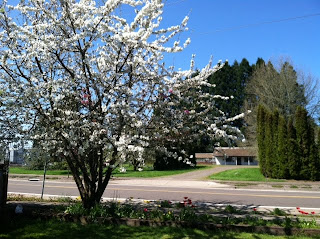 This is the scene outside my house today. My cherry tree is in full bloom as are my tulips. The sky is crystal clear and I haven't felt this good in weeks. It's like the long drawn out fog of winter has finally lifted and with it new hope has replaced the constant sadness I've felt for months. It was like this yesterday too. I took it as an opportunity to spruce up my outsides and my insides. Mind you, I'm not talking about the yard or the house. That's just plain crazy talk. Rather, I had my hair done, went downtown and ordered the bike I've been coveting for months now and sat down and had a heart to heart with my husband. It's been really long overdue. It's so easy to take each other for granted in the busy, busy world we live in. Marriage is funny like that. You can ignore it and it is still there. You can harbor bad feelings and it just hangs out there. Until one day it doesn't, which I've been watching happen to someone else for months. It dawned on me this week after a particularly nasty disagreement that I too could head down that same road if I didn't start taking the time to cultivate my life.

So on a sunny Saturday I did just that. I reopened conversations and I listened. Not for what I wanted to hear, but rather for what was said. I highly recommend it my friends. Should you be having the same ugly conversations that just keep repeating themselves try listening instead of taking. It's amazing what you might learn.

Today I tackled the homework that has been hanging over my head all week. One advantage to online learning is that the internet can be located in many, many places. Today it was located on my front porch. Sitting in the sun with my laptop on my lap and a drink (water with lemon, come one people) breathing fresh air and generally loving the life I have.

I pretty much feel like the tulips out in front of my house right now. Happy. It's been a really, really long time since I could say that. I think I could get really used to this feeling again.

Cheers friends. Enjoy what you have and who you have it with. 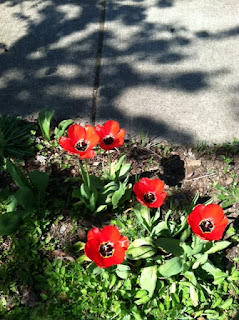 Posted by tracie at 1:35 PM No comments:

Today I had the kids write a persuasive paper about what would make the best class pet. Now mind you, I had no intention of actually getting one, but they didn't need to know that. The logic behind 8 year old writing truly cracks me up. I had a myriad of reasons why I should get a hamster or gerbil. I wonder if the kids know they are nocturnal. Then there were the votes for bunnies. Most of the girls went the bunny route. I had the kid who wanted a lizard because they are green. Sure, that's kid logic for you. I had five requests for ferrets, but my favorite ferret was the one that needed to be named "Kitten."

I not only had a well written paper requesting a turtle for a pet, but an accompanying note from her Mom and digital camera full of pictures of said turtle that we were welcome to have starting immediately.

Paper after paper with the same old kid logic about class pets. They are cool, they are fun, they are nice. They teach responsibility, blah, blah. Then I got one that actually said we could learn about the life cycle from them so it would be like science. Does she realize that would require our class pet to actually die? Clearly she missed my science lecture that day, or she hasn't ever seen "The Lion King." In the end, after reading 28 papers I came upon the clear winner...The Beta Fish.

Not only did she lay out brilliant economic arguments for having a fish, they only need a bowl,fish food (which can last up to a year), and the cost of the fish itself. The entire outlay of cash she estimated at me shelling out about $15. That's cheaper than Otter pops for everyone. She then went on to tell me it's life span can be upwards of 4-5 years so I wouldn't have to repeat purchase.She then calculated out my price per year. Hmm, impressive, yes, impressive but I was still on the fence until she hooked me with this line....."We should get a Beta Fish for a class pet because they have excellent personalities, I know because I have one."

I can't believe I've spent all this time owning a dog when I could have just owned a Beta. Sean will have his dream come true. No more pining for a dog. Excellent personalities...wow! Who knew?
Posted by tracie at 7:41 PM 2 comments:

I can't believe I haven't posted in over 10 days. It has been a wild ride since April started. For the first time ever, I think I'm actually at a point where I can say I'm at full max of what I can handle. Between coaching track, working full-time and grad school, I'm busy every second of the day. It's all I can do to get a run in or two over the week. However, I've got to step up the exercise program because the stress is taking it's toll on me. I figure it's better to reach for the running shoes instead of the Hershey bar right?

So far this week I've exercised two days in a row and I have consumed less than my weight in sugar. It's off to a pretty good start.
Posted by tracie at 7:45 PM No comments:

One teenager, nine bunnies and some flair

This has been the weirdest week in a very long time. I started my final term of Grad School for the year as well as coaching track. Grad school sucks. Shocker I know. Track coaching on the other hand is far more fun than I could have possibly imagined. Who would have guessed that I was born to teach middle school. Well, at least born to coach middle school track. This is seriously by far the most fun I've had remotely related to my job in about 5 years. I kid you not. It was also officially announced that I'm teaching 5th grade next year. Now I wish it was 6th or 7th. Who knew those crazy middle school kids would be the perfect fit for me.

The other bizarre thing about the first week of April is the stream of birthdays our family has. Three days in a row of birthday celebrations. Zach is first, then my mom then Sean's mom. Tricky when I'm already on the tightest timeline of my life. Wednesday was Zach's birthday. He's a teenager now. How the hell did that happen? Of course we celebrated by going to the Mongolian Grill. All you can eat is key to a 13 year old who has grown about 9 inches in the past year alone. That was fun and bizarre when some guy mistook me for someone else and came to the table and gave me a huge hug. Can you say awkward? For dessert Zach had Sarah order him this tasty little treat he had seen before when we went out to breakfast last Sunday. 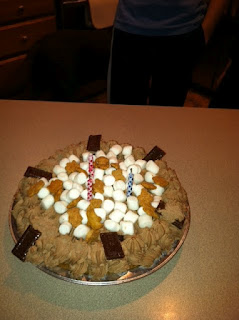 Yes, that is a S'more pie. Could I possibly love this boy any more? I think not. Sean refused to partake in the sugary goodness, but being the excellent aunt I am I joined the birthday boy in a piece.

Yesterday I noted that Easter is only three short days away and I have yet to eat any Peeps. Now anyone who knows me knows my love for sugar covered marshmallow treats and would find this tidbit of information shocking. Usually by now I'm getting sick of them and stockpiling them for the rest of the year. My love of Peeps is so well known that my dear friend Melinda actually gave me some she had frozen for Christmas. Now that's a friend you know has your back when they pull out the cellar reserve stock.

That's why when another friend showed up with a special delivery for me at work today I nearly kissed her right on the spot! 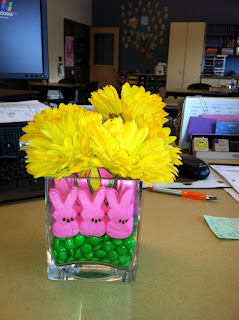 Is this not the cutest thing you have ever seen? Seriously creative. It was so cool I almost didn't want to disturb it by eating any of it. Of course that lasted about 5 minutes and then I quickly decapitated one of those little pink bunnies! Thanks Staci!

Which brings me to final best thing of this week! 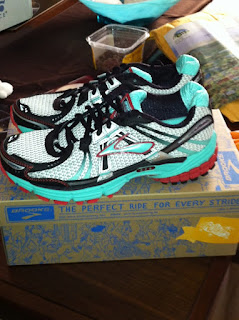 New Shoes! My knees and my shins were telling me it was time to retire my purple running shoes to just walk around shoes. So I looked up some new kicks on Zappos, ordered them and just two short days later they were sitting on my porch just begging to be used. Which is a good thing considering the previous two pictures!

Don't they look fast? I'm going to burn some serious calories in these babies! I better go eat another bunny.
Posted by tracie at 11:00 PM 2 comments:

Bring on Spring Term!
Posted by tracie at 6:27 PM No comments: