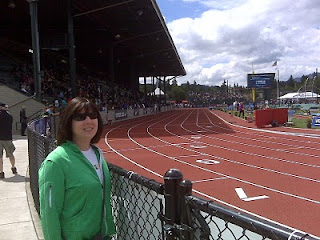 Today we ventured out of our normal weekend cocoons and headed south to Track Town USA to watch our first Prefontaine Classic meet. Sean bought reserve tickets a couple weeks ago and it's a good thing he did because the event was sold out. We had fantastic seats especially considering they were on the back stretch and in the nose bleed section. However, we could see the entire track and the center field action as well. What an amazing show. The three hours flew by almost as quickly as the track shoes on the feet of any of those runners out there. We witnessed 20 men run the mile in sub 4 minute miles. Yes I said minute. Those guys are insanely fast. I can't even complete a thought in four minutes, let alone run a mile. I think it is safe to say that we have a new tradition and we will be attending next year. We were so inspired by those athletes that we had to do something big ourselves.

So...we went to VooDoo donuts in Eugene. They just opened a new store down there so we had to track it down. I must say, while the donuts were as good as always, the ambiance is not as great in Eugene as the Portland location. Believe me, there was atmosphere in Eugene. And a very distinct patchouli stench, but it just wasn't the same. Maybe it was the lack of crazy. Eugene has earthy, but not crazy. No one really does crazy like Portland can! It is extremely difficult to compete with the "flavor" of Burnside.

When we got back to Corvallis we took Rogue to the dog park and then hurried back home to drop him off so we could hit our next big sporting event of the evening. Nope, we weren't done yet. We had a baseball game to go to. We had reserve tickets to The Corvallis Knights tonight. I love those boys of summer! Plus tonight was a fireworks night which is perfect. We got a great baseball game in and saw fireworks after so now we don't have to trek down town to see the fireworks tomorrow night.

Which leaves us more time for our final sporting event of the weekend. The Tour de France starts today! We love watching the tour together. It is the first event that we ever will both sit down to watch together. Technically we are already behind because it started today, which we have on DVR but I don't think we are going to watch tonight because we have a date for a long run in the morning.

But come tomorrow, we'll get up, get that pesky long run out of the way and then hit the couch for some long awaited Lance time! Go Lance Go!

I better sign off for now. All this exercise is making me so tired.....
Posted by tracie at 10:37 PM