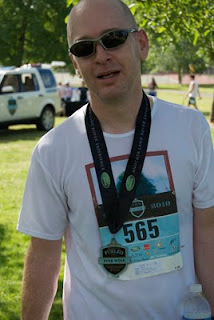 This is Sean after completing the "Fueled by Fine Wine" half marathon this morning. I was supposed to run it too, but since my knee currently has me sidelined, I was the "official event photographer". Isn't he cute? I think I'm going to keep him! I love a man sporting some bling!

Right after this picture we walked back to the car where I was the "official window blocker" while he changed his clothes and I grabbed my unused race number and we headed back down to the event where the real fun was happening. I love a race that ends with more than a dozen local wineries pouring delicious Pinot Noir at 9:30 in the morning. We sampled some fruit of the gods, munched on some string cheese and ate some delicious salty meat! There are no pictures of that cause I'm a public school teacher and it wasn't even noon yet! From there we loaded ourselves back in my trusty little subie where I became the "official pace car" to get one tired racer back home. He is currently content to sit on the couch watching Formula One and Tour De France on the DVR.

With my "official" duties done for the day, I rewarded myself with some Crazy Days shopping downtown and a new pair of Teva flip flops for only $19. While I wish I could have run with Sean in this event too, it was fun to get to see him finish for once. I think I screamed louder than any other fan there. I was kicking myself for forgetting the cow bell! It's good to be a fan sometimes and for Sean Ross, I'm one hell of a fan! Awesome Job Sean! Can I touch the medal?
Posted by tracie at 4:18 PM