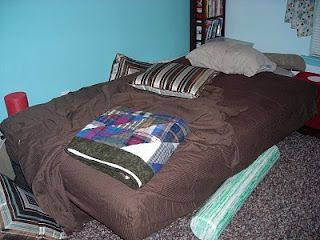 I just waved good-bye to my brother. Technically he is my brother in law, but that is only because the law says he is only related to me via marriage. To me, he is my brother and I adore him. I'm so thankful that my sister chose him. He was in town for the weekend, brought by business but mostly spent in pleasure. We had a blast hanging out and talking about the old times, the current times and the what might be times.

I'm keeping my fingers crossed for the what might be times.

For the record, I don't think that my husband has smiled that much in ages. He was like a kid in a candy shop and I'm pretty sure he considers Stafford to be his brother as well. Running, beer sampling, meat eating, story telling, male bonding galore at Casa de Ross this weekend. For the past 48 hours this house has been in testosterone overload. You couldn't really tell the difference, except there were a few more dirty pint glasses and a distinct running gear smell in the air. But the bonding, laughing and sense of a lost tribe member coming home were priceless and I'd gladly repeat it for the next 50 years or so. Like I said, I'm keeping my fingers crossed for the what might be times.

I'm also keenly aware of the subtle shift that has taken place in my house. The testosterone shift. It's not a major fault line, there are no cracks in the surface even. It runs much deeper. In fact, the effects will only be seen if the "what might be" does not come to fruition. The difference is that I instead will be the one who picks up the pieces and offers the support. Funny how a boy might not see what he really wants until he gets a tiny glimpse of what could be. Those only children, turns out they need a brother.

Yep, I am crossing my fingers, legs, toes, and even my eyes for the "what might be" times.
Posted by tracie at 9:42 AM