Love the one you're with! 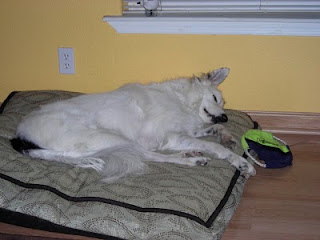 This is Rogue, my faithful border collie of the past 5 1/2 years. (give or take a month or two) Today I took him to the vet to check to see if he had an ear infection, which he in fact did. After about fifteen minutes of poking and prodding, a nail trim and a chunk of my paid down credit card, were were out the door. A bag full of meds and a grumbling dog mama hopped into the car and drove home. I met my mom for lunch and we swung by Animal Crackers, my favorite store which just so happens to be owned by one of my favorite people! But I digress from my story.

While in Animal Crackers I ran into a dog which was the spitting image of my border collie "Lucky 13". I kid you not, this dog looked exactly like her. It took my breath away. Lucky was my 13th anniversary gift from Sean and the light of my life for the two short years that we had her. She died of a crazy aggressive form of cancer that took her away from us. I don't think we ever really recovered from that. While watching "Rosie" her twin dog, I had what my arch nemesis Oprah would refer to as an "Ah ha" moment. Curse you Oprah. I'll call it an epiphany instead.

What I realized is that I have spent the past 5 years wishing that Rogue was Lucky and quite frankly being annoyed with him that he isn't. He is not dainty and graceful. He is a bull in a china shop. He isn't smart as a whip, he is dumb as a post. OK, not dumb as a post but rather, less brilliant than a border collie should be. And he is a genetic nightmare. Rogue should never have lived at all. He has had one health crisis after another in his short 5 years of life. And yet as I thought back to our early visit to the vet this morning he was just a happy to be at the vet and see all his vet pals as if we had been at a free demo day at the doggy cookie house. He loves everyone. (well, almost everyone and we are working on that one) He is always happy to do just about anything and always game for something new.

I was born with horrible health problems too. I spent the first five years of my life in and out of hospitals and surgeries, probably making my parents crazy too. I bet they never once said "Jeez, why did we have to get this defective kid, I sure wish she was different than this". So as of right now I will stop comparing him to Lucky or any other dog we've had prior to him and start enjoying him for the dog he is. I'm going to start right now by taking his freshly trimmed nails out for a lovely mud bath trail run. To quote that horrible song from the 70's:

If you can't be with the one you love, love the one you're with! Normally I don't advocate that type of thing, but I think I really should take a cue on this. Now off to dirty some paws.
Posted by tracie at 4:05 PM