Feel the Fear (but protect your eyes) 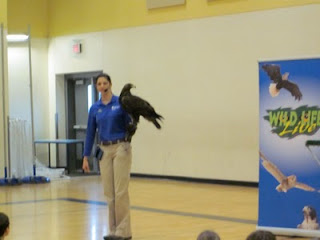 I hate birds. I don't know why. I like to watch them from the privacy of my car, or inside my home. Pretty much anywhere behind glass is my favorite vantage point. Today however, I did not have that luxury.

This picture was taken today during our "Birds of Prey" assembly. It is a Golden Eagle. You might ask yourself, when you have such a cool assembly coming to your school, why would you take such a crappy picture of such a beautiful bird? Well, I would answer you that the picture is a direct result of the announcement just prior to pushing the button to snap the picture. This bird would be demonstrating a "fly over". WTF? Did she just say that bird is going to fly over our heads? No, I couldn't have heard that right. Wait, why is she unhooking the leash thing on his foot? Oh crap, this is not going how I thought it would in my head. And so you are damn lucky that my photo is a shake induced blurred picture of a Golden Eagle and not the underside of a 3rd grader as I hoisted them into the air to act as a shield during the fly over.

And so it went, I sat their brave as a Golden Eagle, Turkey Vulture, barn owl, Biggest Fucking Owl Ever (not its scientific name though), and numerous hawks flew overhead, back and forth for 45 minutes. When they brought out the Bald Eagle I thought I might actually poop my pants, but luckily it had an injury. Ok, lucky for me, not so lucky for him, and he was unable to fly today.

My favorite part of the day? When the Turkey Vulture went Rogue and flew all over the gym as the zoo bird ladies tried to lure it back to it's original perch. That was the closest I came to asking the kids if they wanted to play dog pile and offer to be on the bottom. But I survived.

The Golden Eagle was really cool to watch. But I could tell she had her eye on me. Lucky for me she could never really zero in because she only had one. If she would have had two, I'm sure I wouldn't be here to blog about the entire thing.

And so I say, good job to me for surviving the assembly intact and without loss of any bodily functions. However, if they come again next year it is going to require a martini or two for lunch! Maybe they will bring snakes too, or a hands on cougar display.....
Posted by tracie at 7:01 PM