Revelations on the Clearance Rack. 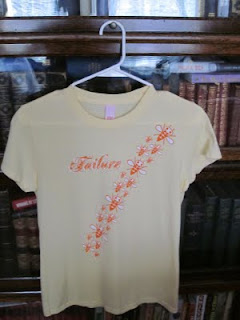 I'm not sure what the bigger question here is. Why a company would produce a shirt that says "Failure" on it? Or why I felt so compelled to purchase it.

Failure. It has such a negative connotation to it. It is something that we all strive to avoid. Don't Fail. Failure is not an option. Why? Ever since I felt the need to purchase this shirt off the clearance rack of the Newport bike shop yesterday, I've been pondering my attraction to it.

Then it occurred to me. Failure is not a bad thing. Failure teaches us things about ourselves and about life in general. I've learned more in this life of mine from the things I've failed at than I ever have from my successes. Failure makes you pull yourself back up and try again. Failure makes you feel alive. Success just leaves the room for questioning. Sure, I did it, but it could have been different, I could have done better, faster, stronger. Doubt creeps in with success. But with failure, there is no where to go but up and it acts like a challenge to do better. I would argue that the only true failure is the failure to try in the first place.

And so I go forth embracing my failures as I use them as building blocks to move forward. Closer and closer to real success that you feel in your soul. Because a life without failure really isn't much of a life at all. Maybe that's why I was so oddly attracted to a little yellow shirt on a clearance rack on a sunny day at the beach.
Posted by tracie at 1:29 PM