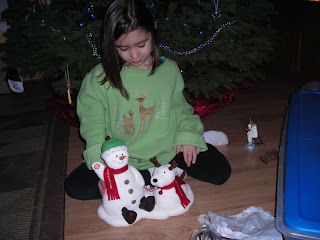 This was the scene at our house on Saturday night. Boxes everywhere, crate paper flying. I had help decorating my tree this year. First, the tree is HUGE. Funny how out at the lot it didn't seem so big. Anyway, it barely fits in the house, but it made it and now stands with all it's glory (crooked glory cause it has one big bow in it's trunk). Anyway, with the addition of the Andre the Giant sized tree, came the need for many ornaments. And new lights. Sean wanted a blue tree this year, so I went out and bought brand new lights at the store. Unfortunately, three strands was not enough for said tree so I mixed in some whites. I really like the result though.

Maddie, Sarah and Mom came over to help with the decorating. Zach came to help too, but he mostly helped increase the butt imprint in our spare room couch playing video games. I called him in for his opinion several times which was always "two thumbs up". Yup, I LOVE that middle school boy. If I could just have him live here I would!

Anyway, it is fun decorating with a small one. They can only reach about a two foot area on the tree so the ornaments get congregated in one small spot. It looks awesome and I love it. Mom, Sarah and I filled out the rest of the zone. I love when Maddie kept picking up each ornament and saying "Oh, this one is beautiful". I won some vintage ornaments at the white elephant on Friday (who would get rid of those?), which proudly hang on my tree. I think the bedazzled nature of them was Maddie's favorite.

The best part was when she discovered our Hallmark Snowman/snow dog that plays jingle bells. It's in the picture at the top. Now normally I'm not one for cheesy Hallmark stuff like that. The story behind it is that when Dad first had his brain tumor (which we thought was a stroke) and he was in the hospital for a week around Christmas, the nurses had one of those at their Station. It was the only thing that made me smile that year at Christmas. Low and behold, on Christmas morning, I unwrapped one of my very own. That was 6 years ago and to this very day, pressing that snowman's hand and letting it do it's thing makes me smile.

I'm glad to see that it has the same effect on Maddie. Maybe someday that will be her vintage Christmas present one Christmas morning.
Posted by tracie at 7:40 AM