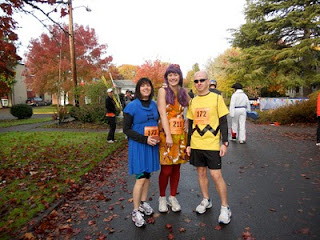 This is the official "Ross/Williams" Corvallis 5k running team. We have Lucy VanPelt, Charlie Brown and a Rag Doll. I personally find the RagDoll to be the most scary costume, but then you know how I feel about dolls.

This morning we all ran the Corvallis 5k through OSU's beautiful campus. I was worried about it yesterday as I went to bed to the sound of pouring rain on my roof. However, this morning the skies had cleared and the sun was shining which made for a beautiful morning and a perfect fall run.

The run itself was fantastic. I wore my new Mizunos and I absolutely love them. They didn't really match my Lucy dress, but hey, it's hard to get that saddle shoe look out of a pair of running shoes. No matter. We looked pretty good all things considered. I found that dress yesterday at the second hand store for only $14 which is much less than the pain it would have been to try and fashion something out of duct tape which was my original plan. So yay for thrift store finds.

The only downside of the entire even was at mile 2.9 when I rounded the corner just about the time Laura said "let's pick up the pace and finish strong." I dug down, pushed hard and completely crashed. Seriously. I crashed. Falling on pavement is never a fun thing to do, but as an adult it is even more annoying than as a kid. First, you are totally embarrassed by the fact that you are going down and there is nothing you can do to stop it. Everything moves in slow motion as time slows to a crawl and your bionic movements pause with every shift as you head down, down, down to the ground. The last thought in your head is usually something like "shit, this is going to hurt" followed quickly by "Oh crap, how many people are going to see this?" Well, in my case since I did it right at the corner and there was a wall of spectators watching, the answer was way too many. I'm hoping that none of those cameras there caught it because that is more than my 41 year old pride can take. However, other than leaving some skin on the pavement and some bloodstains on my dress and leggings, I think I got away pretty good. I don't even think I lost more than about 10-20 seconds in the "nothing feels broken, get up and run stupid" conversation I had in my own head. On the slightly annoying side, not one person except my running partner and team mate Laura asked if I was ok. Trail runners would have sacrificed their own times to help me up. Roadies jump over you or get annoyed you are blocking them! Here is a small sample of the damage. 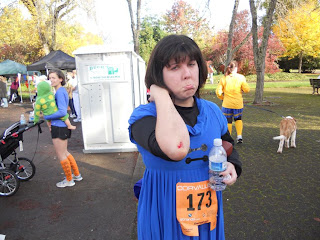 All in all, it was a darn fine day. Sean set a PR and won 3rd place in his age category. I think I set a PR myself at 33:05 but I'd have to double check back to my last road 5k which I think was about 5 years ago. Regardless, it was a beautiful day to get out there with other costumed fools and have a blast.

Next year, Zombies!
Posted by tracie at 3:17 PM