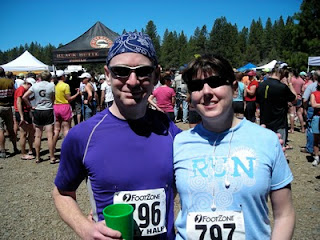 That is the only way I can think to adequately describe the gamut of emotions I went through while completing my first 1/2 marathon yesterday. I haven't even been able to blog about it before now because wrapping my mind around the experience and trying to put it into words has been a challenge in and of itself. But work calls and I must get this down before it is too late and becomes a foggy memory.

The biggest surprise of all was the emotion that came on so strong so quickly. I don't think I even hit mile one before I was almost reduced to tears over the mere fact that I was actually there running in a half marathon. Never once did I really believe I was going to make it there. I talked the big talk, but I always had a Plan B that would somehow get me out of it in the last minute. Even the knee injury of last week and the thought that I might not get to go didn't remove the Plan B expectation I had for myself. But there I was, lined up on race day with everyone else and I felt overwhelmed.

After that first mile and for the next six or so I just felt proud. I don't think I could have custom ordered a better location for my first half. It was pristine trail, with sage brush and Ponderosa pines stretching out all around me. While I understand the technical difficulty of the route, it was in such better condition than the trails that I have run around here and it felt like a dream.

Then came the cramping between miles 8 and 9. They stopped me in my tracks. What was this? Why now? I stopped, stepped to the side and found a stump to stand on as I stretched every possible muscles I could move. I felt a hot fire of annoyance and then shook it off and started on the trail again. I was fine for another mile and then I hit the wall.

I had heard about the wall from other runners. I had no idea what they meant. Now I do. At about mile 10 or so I had thought to myself "wow, I feel great, I can't believe how great I feel". Not more than 30 seconds later I started getting blurry vision and got instantly cold and every hair on my body stood up on end. I felt like I was going to puke or pass out or possibly both. I remember thinking to myself, "oh holy hell, I've just passed the last aide station and I'm going to drop dead out here because that was the last one". I grabbed for my last Shot Blocks and downed some water and slowed to a walk for a few minutes. As quickly as it came, it was gone again, but not without having left me shaken and my resolve questionable.

As I got back on the path again I thought to myself of all the training that had gotten me here and all the things that my friends and family had gotten through in their lives and I summoned my resolve and picked it back up to a jog. And that is where I stayed from about mile 11 on. My legs hurt, each step was an effort, but I wanted to finish and I wanted to finish strong. So I cranked up that little ipod of mine and I jogged past number 12, and 13. And then there it was, the finish line. And there he was, my Sean, waiting for me and cheering for me and encouraging me to finish strong. And from somewhere deep inside my being I summoned some last bit of fire and I picked up speed and finished with a faster pace than anything else I'd run all day. Which of course makes me wonder if I could have gone faster all along. But then I guess we all feel that way at the end of the race. Did I cry like a baby when I came across that line? No, actually I didn't which surprised me more than I can imagine. All I felt at that point was exhaustion and elation. Goal realized, Tracie actually finished what she started. Who knew.

As we mingled with the other racers after the finish, I was in awe of the shared experience. Everyone was so supportive and chatting it up and smiling and taking pictures for each other. It was one big community of trail runners who shared one day that made them in one form or another a different person, even if just for one day.

For me, I think it was more than that. I still can't find the exact words to describe what happened to me yesterday. I just know that I am different today. It's more than just running the half, although that was certainly the impetus for the change. It is more about viewing myself as someone who "does" rather than someone who "tries". Yes, I do believe Master Yoda would be proud.
Posted by tracie at 6:53 PM